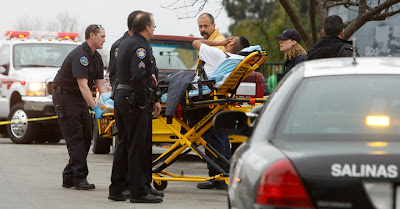 The dispatcher said a guy was asking for an ambulance. He had just been shot in the head. His buddy, too, in the leg.

I get the address, jump in my car. Sirens. It’s my first day back from vacation.

When I get to the neighborhood, I park on a side street. I have the overwhelming feeling that I’ve parked in that exact same spot before, to cover a shooting in the same neighborhood.

I look up and the truck parked in front of me has a “Loving Salinas” bumper sticker. It’s the slogan of a local church’s campaign to help make this violent city a little more peaceful. I’m struck by the irony and futility of it all.

The shooting went like this: A couple guys in masks walked into the driveway and shot the two guys. I photograph them, on stretchers, being wheeled to the ambulances. Neighbors are gawking. Everyone looks grave. I have seen this scene over and over and over and over.

I move to the other side of the block, shoot the cops doing their thing. Fill my card. I put in a new one, the last card I filled before I went on vacation. I check the photos before I delete them. They are pictures of another shooting.