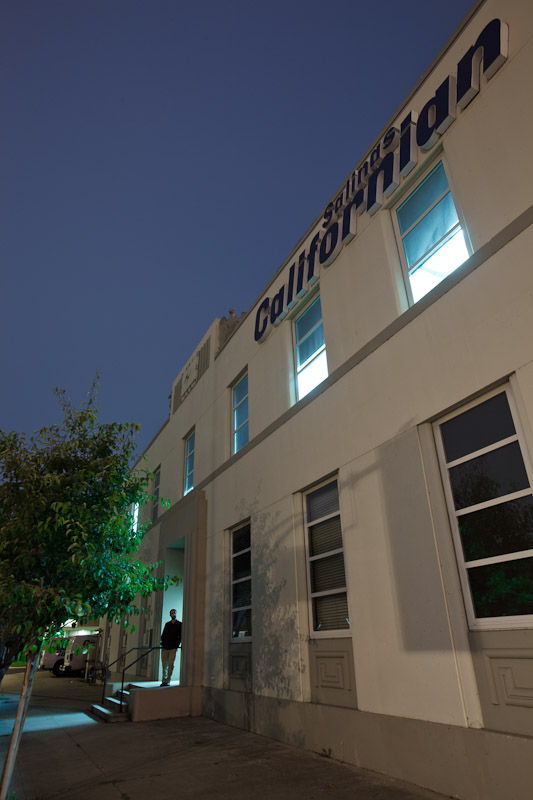 Today I quit the best job I’ve ever had.
There are a lot of people who will call me crazy for doing this. As a full-time newspaper staff photographer, I was among a declining number of people to hold a very coveted job. I get paid by a publication to make pictures for a living, a job that gives me steady pay, health benefits and front-row seats to some extremely compelling events.
But my job, like many newspaper staff jobs across the country, is going away. Not tomorrow, but sometime. Newspapers are losing circulation and advertising and I’m not convinced that the industry has a solution. So instead of going down with the ship, I decided to make a little life raft and paddle away on my own. I’ll be an independent photographer, earning a living with my camera on my own.
The decision to do this was made in the fall of 2008, during a discussion with my then-fiancé (now wife) in our kitchen, around the time my newspaper prepared to lay off fully a third of its staff in one fell swoop. Back then, I was pretty convinced that my job would be eliminated soon, too.
But I’ve held on, as has most of the newsroom staff since that initial round of layoffs. And I’ve discovered that my prognosticating about the future of my industry has been largely off the mark, so I stopped guessing. Except for one hunch: Someday, my job will cease to exist. And I’d better prepare.
In discussions with industry colleagues since that decision was made in 2008, I’ve heard a variety of reactions. Several freelancers told me to hang on to my staff job as long as I could. One signed off an email with a simple plea: “Keep your staff job.” A former staffer who got laid off and found himself suddenly freelancing — fairly successfully, by all accounts — took his old staff job back when an opening arose. Others said I was right to prepare, and a widely circulated blog post by the insightful Chip Litherland endorsed the path I was on.
So, around the beginning of this year, after two and a half years of preparing to be my own boss, I finally found myself with enough work, savings and preparation to make the move truly happen. August 11, 2011, was my final day as a staff member at The Salinas Californian — nine years, one month and 11 days after I started.
During the coming weeks, I’ll be publishing a series of blog posts looking back at my newspaper career. I’ll be talking about the volume of assignments I’ve done, some of my favorite ones, about the emotional impact of newspaper work, and sharing some of my best frames.