This blog post is a look back at one of my favorite stories from my newspaper career. It happened in July, 2004.

The call came from the news editor on a routine Sunday afternoon : “There is a bull loose in North Salinas.”

The tone in Katherine’s voice indicated that she was certain about the situation that was unfolding. I headed north with the appropriate urgency, my police scanner filling in details.

When I arrived on the scene, I saw a large agricultural field, some emergency vehicles, a few pickup trucks, and a few hundred yards away, a lone person on a horse facing off with a very large bull. 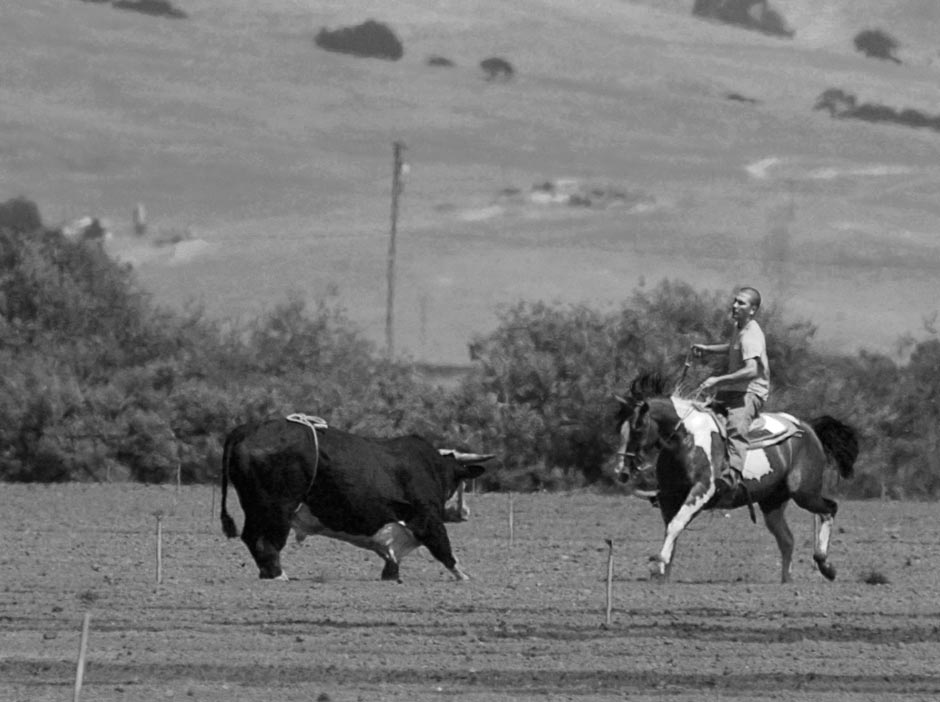 Salinas is well known for its annual rodeo, a hundred-year-old tradition called California Rodeo Salinas. Less well known are the occasional small rodeos that are held at the Sheriff’s Posse Grounds. On this Sunday in July 2004, a bull managed to jump over a fence and head south, toward town.

When bulls are used in rodeos, a rope is tied around the animal’s flanks, applying pressure intended to persuade it to jump, buck and spin. The bull that was standing in the field in front of me still had a rope tied around it. It was pissed. I grabbed my cameras and ran down a farmhouse driveway, toward it.

Salinas is an agricultural town, literally an island in a valley of lettuce and other crops. Where the town ends, fields begin. The transition is abrupt. And it was in one of these adjoining fields that people from the rodeo had caught up to their fleeing bull. They were making a stand in front of a farmhouse in the middle of this field — they had a truck with a livestock trailer, several rodeo hands, and the young cowboy on the horse.

When I got close enough to take pictures, I watched as the following scene unfolded: The bull was encouraged to enter the livestock trailer, it declined, and decided instead to knock down and gore the cowboy, who was no longer on his horse.

After I shot these photos, the bull stopped, turned, and looked at me. I ran up a tree.

I did this not only because looking into the eyes of an angry bull is extremely frightening, but because I had seen many rodeo cowboys climb fences or whatever else was near them when trying to get out of the way of an angry bull. It worked, the bull turned and headed west toward another field.

By this time my coworker (and bandmate), reporter George Sanchez had arrived. We figured the only way to really follow the action was to be on the livestock trailer, so we asked the (very harried) driver if he’d mind if we hopped on. He told us not to fall and drove off after the bull.

As George and I clung to the back of a dirty livestock trailer on the trail of a angry bull that was only a few hundred yards away from rampaging through densely populated neighborhoods, we had a moment to pause, look at each other, and consider what we were doing. “This is awesome!” we said, grinning.

By the time the truck got to the stretch of road that separated the fields from a Home Depot parking lot, police had arrived, and they were armed. They had made it clear that their job was to prevent the bull from entering the parking lot, which was currently packed with a Sunday crowd hoping to get a look at the loose bull. The rodeo hands redoubled their efforts at finishing their job, knowing that if they failed, their valuable animal would be shot dead in the street.

The bull headed west until it encountered a major road. I watched as it turned and ran alongside a car for a few seconds, probably giving the driver reason to change his or her underwear. The rodeo hands managed to redirect it back toward the livestock trailer, where the following scenes unfolded: 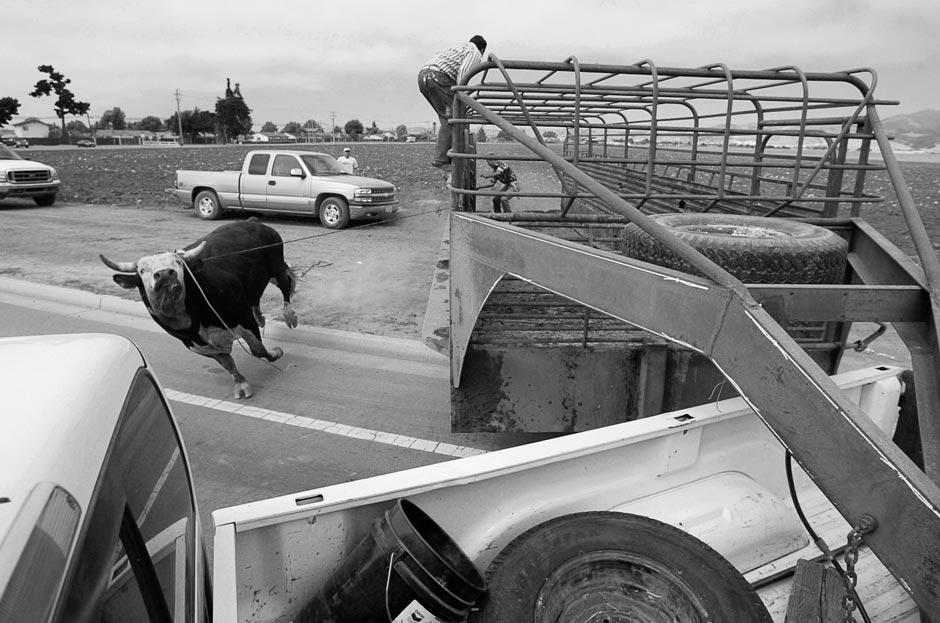 By the time the bull broke free of the lasso around its horns and headed toward the Home Depot parking lot, I had moved into the bed of the truck for a better view. George had the good sense to get off the truck and behind the police. When the gunfire began, I was directly in line with the police (who were shooting) and the bull (who was absorbing a lot of bullets). As I was taking photos, it began to dawn on me that I was, as they say, in the line of fire.

“One in the truck! One in the truck!” I heard the Sergeant yell. I realized she was talking about me, jumped out of the back of the truck and ran down the road as quickly as I could, covering about three miles in just under two seconds. Not really, but I was scared enough to run faster than I had ever run while carrying cameras. 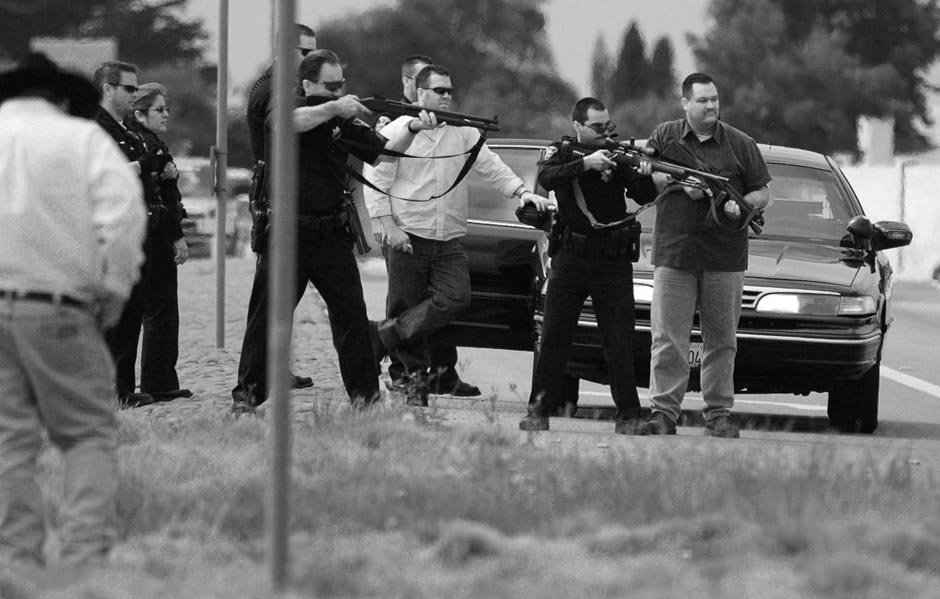 While the Salinas Police Department is a heavily armed force, it was a Sheriff’s deputy that eventually brought down the bull with his long gun. (I learned years later that this led to a joke within the police department: The Sheriff’s Office is the best at shooting the bull.)

Soon the bull was on its side, dead in the road. The rodeo organizers looked over their slain animal, the gored young cowboy was taken to the hospital and the crowd at Home Depot began to disperse. As one onlooker pulled out of the parking lot, he leaned out of his truck and said to a nearby cop: “You didn’t have to shoot it!”

Sure, buddy. You try catching a loose bull.

The story ended with a trip the next day to the hospital to visit the gored cowboy. Turns out he was a teenager who grew up on a ranch in Mexico and was used to lassoing animals from horseback. The bull’s horns got his arm when it knocked him down into the bushes, but he was recovering. Someone had given him get-well gift of a stuffed animal, which sat next to his hospital bed.

It was a bull.